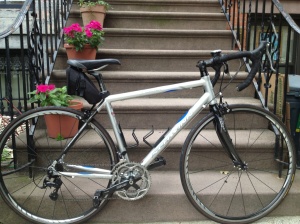 Last week, while riding my bike a short distance, I developed knee pain (again) rather quickly. I’d been feeling extremely uncomfortable on my bike and decided, rather than putting up with it, to ride it to the local bike shop and ask them if they thought it was too small. They did. So that was it. I no longer needed to decide when or whether I would sell my hybrid and get a new bike. The bike had become unrideable. I put it on Craig’s list and it was sold 36 hours later. In the meantime, I test rode a few bikes.

First I tried the Specialized Vita, a woman’s specific hybrid. It was a great bike, shifted well and fit perfectly. But then I remembered I didn’t want a hybrid. The plan when I bought the hybrid was to see whether I was riding more for commuting or recreational purposes and, after a year get a road bike if it was more recreational.

So I tried the Specialized Dolce Comp. I didn’t love it as much as I hoped I would. It fit well, although the bars were a bit wide. But I liked the shifters and breaks on the Elite better, which I couldn’t afford. In the meantime, I had gotten a few responses to inquiries I had made about used bikes on Craig’s List…I found a bike I liked. A Schwinn Fastback Comp owned by a woman who had replaced the stem with a shorter one and replaced the seat with a woman’s seat.

Saturday morning I sold my bike. Saturday afternoon I bought a new (used one). Yesterday I put some clipless pedals on it. I’m so excited to have a road bike again. And just in time for the Danskin Tri in 2 weeks!